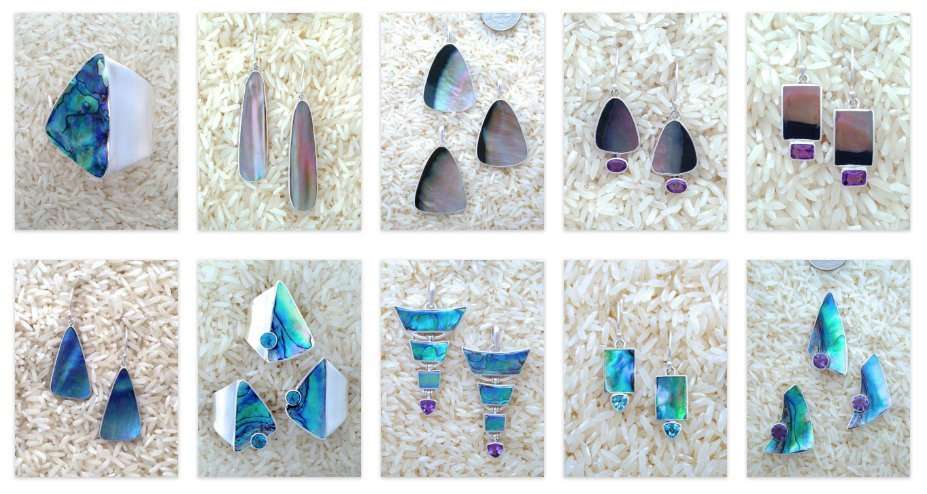 Marta Howell Jewelry is a beautiful collection of handmade custom Sterling Silver Jewelry from Bali. This unique collection of bracelets, necklaces, pendants, rings and earrings are made with mother-of-pearl and are combined it with semi-precious stones such as blue topaz, amethyst, peridot, citrine and garnet. The shape and color of  each shell is like a special piece of art in every piece of jewelry. We wholesale and stock an extensive collection of Marta Howell contemporary jewelry. We stock more of these popular styles than anyone online, and all items are available by special order. Order now or feel free to call, email or text us for more Marta Howell Jewelry information. 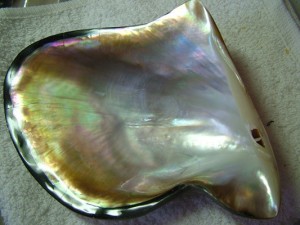 Black lip oysters are winged shaped oysters that seldom produce pearls. The Black Lip is a tropical species with a pearly interior and long, wing-like projections at the hinge. The oyster produces a brilliant nacre with a rainbow spectrum of hues and colors. The oyster is a major source of mabe pearl production which are formed by inserting a half-sphere between the mantle and the shell.

Pinctada margaritifera, commonly known as the Black-Lip Pearl Oyster, is a species of pearl oyster, a saltwater clam, a marine bivalve mollusk in the family Pteriidae. This species is common in the Indo-Pacific within tropical coral reefs.

The ability of Pinctada margaritifera to produce pearls means that the species is a valuable resource to humans. The oysters are harvested wild from coral reefs and are also commonly grown in aquaculture, both primarily taking place in the Indo-Pacific region.

The common name of this species refers to the fact that there is black coloring along the margins of the interior of the shell. Externally the shell is dark grayish brown or green, though white spots are common across the shell. Adults usually reach between 200mm and 250mm in height. A distinctive feature of the species is that the hinge has no teeth.

This species is commonly farmed and harvested for pearls, and there is general consensus that the quality of pearls from Pinctada margaritifera is the highest quality out of all the pearl oysters. Pearls form when a small particle enters into the oyster and nacre is released by the oyster to coat the particle or object, eventually creating a small pearl. The particle might be a grain of sand, organic material, or even a parasite. The oyster’s release of the nacre serves as an adaptation of the immune system to isolate the invasive particle and irritation. ThePinctada margaritifera in particular produces gray or black pearls. 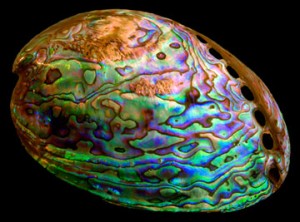 The Paua Abalone are cultured for both pearls and mother-of-pearl shell but they are largely a by-product of the seafood industry. Paua, also known as rainbow abalone, is most commonly found along the shores of New Zealand. Paua are different from other abalone species by their bright, deep iridescent colors that are most desirable in rich blues, purples and greens.

In New Zealand, abalone is called pāua (/ˈpaʊə/, from the Māori language). Haliotis iris (or blackfoot pāua) is the ubiquitous New Zealand pāua; the highly polished nacre of which is extremely popular as souvenirs with its striking blue, green, and purple iridescence.

Like all New Zealand shellfish, recreational harvesting of pāua does not require a permit provided catch limits, size restrictions, and seasonal and local restrictions set by the Ministry for Primary Industries (MPI) are followed. The legal recreational daily limit is 10 pāua per diver, with a minimum shell length of 125 mm (4.9 in) for Haliotis iris and 80 mm (3.1 in) for Haliotis australis. In addition, no person may be in possession, even on land, of more than 20 pāua or more than 2.5 kg (5.5 lb) of pāua meat at any one time. Pāua can only be caught by free-diving; it is illegal to catch pāua using scuba gear.

Pāua shells make up the decoration on Xena’s first chakram in the hit TV series Xena: Warrior Princess.[10] Although the show was set predominately in Ancient Greece, the shell is used because the pāua is native to New Zealand, where the show was filmed. 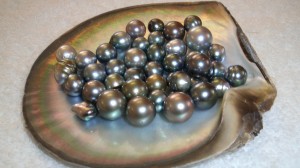 The culturing process involves an expert grafter, who inserts a bead made from a mollusk shell into the gonad, or reproductive organ, of the mature Pinctada margaritifera mollusk. It takes two years for an oyster to mature enough to begin producing pearls. Inserted with the bead is a piece of mantle tissue from a donor mollusk, which influences the color of the pearl being produced and provides epithelial cells to ensure that the oyster produces nacre around the nucleus.

The materials used in the process are organic, to decrease the probability of the oyster rejecting the nucleus.[1]The shell is sanded and rounded to form the bead, so the pearls produced have a rounder shape. The whole process takes place quickly, because oysters cannot survive very long out of water.[2]

The cultured Tahitian pearl comes in various shapes, sizes, and colors; shapes include round, semi-round, button, circle, oval, teardrop, semi-baroque and baroque.[3] Because of their darker hues, Tahitian pearls are commonly known as “black pearls”.[4] However, Tahitian pearls have the ability to contain various undertones and overtones of green, pink, blue, silver and yellow. All (or any combination) of these colors may be seen in a cultured Tahitian pearl. Due to the variety of shapes and colors of the Tahitian pearl, it has been known to fit in any jewelry setting.[5] The versatility and mixture of color give it its value.

The Gold Lip Oyster is sometimes known as a White or Silver Lipped Oyster. The oyster is a marine bivalve mollusks that has a strong inner shell layer known as mother of pearl composed of nacre which occurs naturally in the warm tropical South Pacific waters. These gold lipped oysters are the largest of the oyster species. The Gold Lip Oyster produces a beautiful silver-white, pink and gold hue, one of the most oysters from the South Seas.